Girls VS Boys memes- What is the point really?
Add comment
Share:FacebookTwitter

Girls VS Boys memes- What is the point really?

I bet you have seen at least one of these memes every day. This is just one template. There are so many other templates used by meme creators to make content on the grounds of girls vs boys.

It is funny at times!

Sometimes the meme creator doesn’t have any misogynistic thoughts in their mind before creating such a meme and just creates it to show how different girls and boys are.

But most of the time we know the underlying message.

Even though not all men want to pick on women or make fun of them, these memes and the comments under such memes can tell you there are a lot of them who want to.

The one-liner to explain the mindset of these people is to tell that girls are different and that they should be compared with boys on a daily basis and show who is better.

I am not reading too much into it!

What else can be the meaning of the following meme?

Things one can understand from such a meme:

· Boys don’t have any showing off habits.

· Any big achievement is not a big deal to them because they can do it any day.

· Any big achievement is not something that brings a special meaning to their life and it is beneath their day-to-day achievements.

· Girls are showing off even the little things in their lives.

· Any small achievement is the only thing that can be special about their lives. Because they don’t have a lot of achievements.

Oh, am I reading too much into it?

Wait now before you get all riled up against me!

Do you know what a girl faces every day in life to be in the same place as a boy? To go to college, to get a job, to not marry until she wants to, to work after marriage, to work after having a child?

So why is it funny when you see such a meme? If this is a meme trolling actors without talent then that’s a different story.

But no! This is straight-up says, girls.

Let me just tell people that it is not the same as boys for girls to get to success no matter what level it is. So stop belittling girls to boost your ego. And generalizing girls and their behaviors are helping no one!

How many times have you seen memes about different scenarios, where the girl cries for a small reason while a boy will still be smiling even in the worst situation?

What is wrong with women being emotional? What is the point of such a meme? Are you promoting the toxic masculine idea that men should not cry and suppress their emotions? Do you feel superior when you know women cry for small problems?

These kinds of memes are not really funny! If you look at those comments below such memes you know what it promotes. You guessed it right! Long-lived misogyny in the minds of people in the name of traditions and culture among other stupid reasons.

The level of misogyny that exists in this world is scary.

“But why should someone care about these trivial things? Who does it really affect? Women- they probably deserve it.” That’s the answer from misogynists.

And the long-lived misogyny will not disappear from this world as most of us want. Instead, it will be a part of social media through memes and forever stay ingrained in everyone’s minds.

Everyone knows that women and men are different. Even among these broad categories, each and everyone is different. There is no need for stereotyping women to feed the superiority complex of misogynists. If you are one of those meme creators stop promoting these toxic ideas! And for those people who enjoy such memes, you need help! Your ideas are set in the past and are wrong. 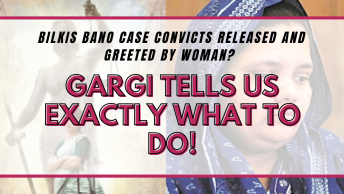 Gargi tells us exactly what to do!